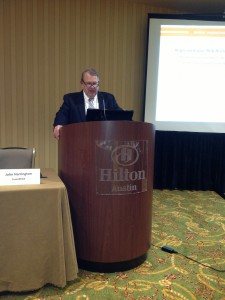 Rep. Barrus presented his goals for the group for his term. They included: formalizing collaboration with elected officials through organizations like the Western States Caucus; determining the appropriate messaging so that those opposed to states development of energy resources aren’t the ones defining the debate; increasing the collaboration amongst members on legislation to ensure that when there is a problem, it get’s tackled and solutions are found; create working groups within EPSC to focus on particular issues so that there is on-going work on issues of relevance to the group; and growing the membership and influence of the group.

EPSC appreciates the leadership of Wyoming Speaker-elect Tom Lubnau (pictured right) over the past two years and his continued support of EPSC.